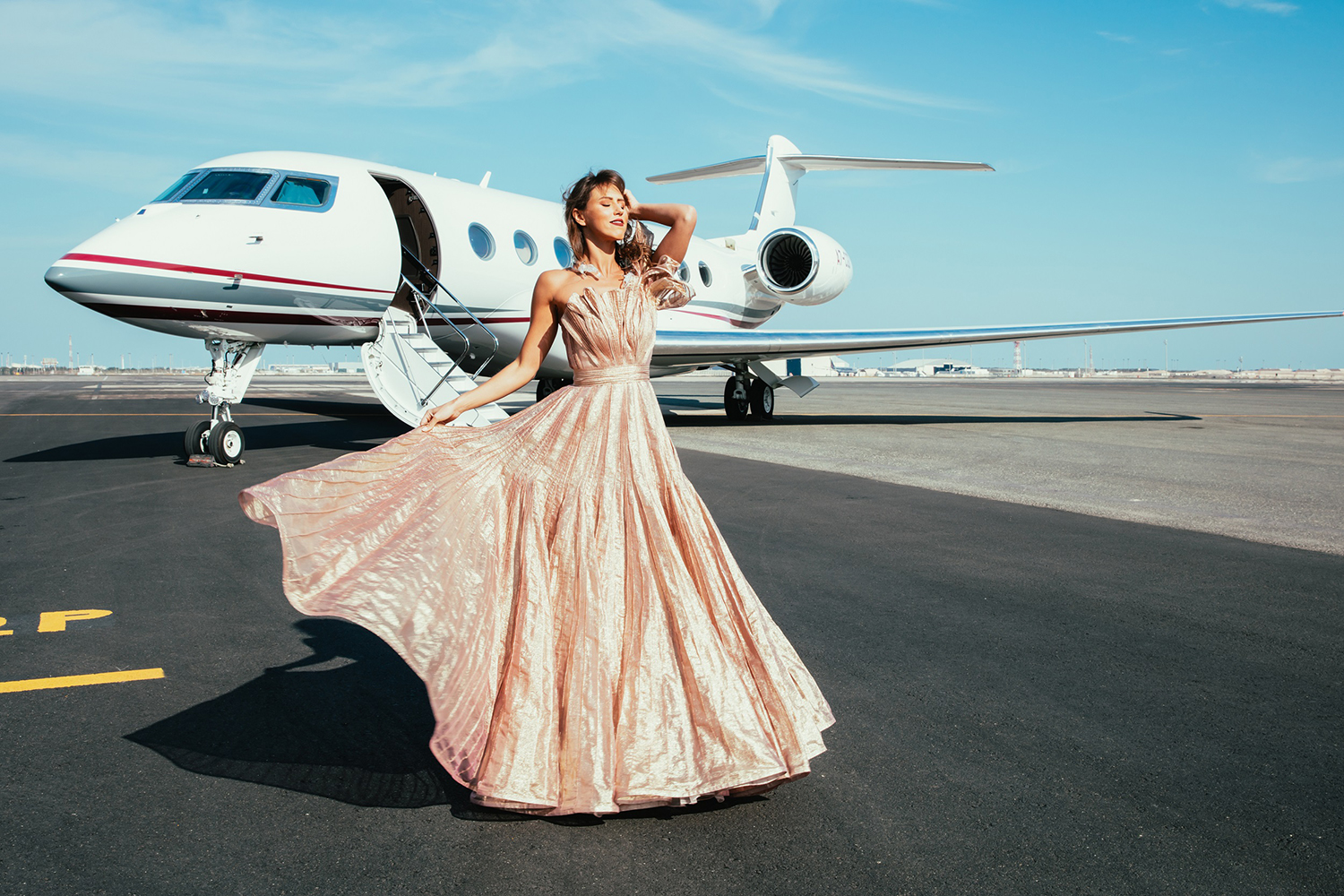 DOHA, Qatar – To celebrate this year’s Doha Jewellery and Watches Exhibition (DJWE), Qatar Airways hosted a stylish fashion show on Thursday, 21 February 2019 on board its state-of-the-art G650 private jet. The event showcased the exquisite jewellery and fashions of acclaimed Chinese designers Grace Chen and Beau Han Xu, set against the backdrop of the world’s most luxurious private jet.
Guests who took part in the event included top international style influencers from the fashion and beauty world who were invited by Qatar Airways to Doha to participate in this year’s DJWE.

Qatar Airways Senior Vice President Marketing and Corporate Communications, Ms. Salam Al Shawa, said: “Qatar Airways is delighted to be the Official Airline Partner of the Doha Jewellery and Watches Exhibition, an event that celebrates the very finest in luxury and craftmanship. What better way to highlight Grace and Beau’s magnificent designs than to showcase them against the backdrop of a Qatar Executive jet – the epitome of luxury and refinement. We are delighted to welcome these talented designers to Qatar, and look forward to helping them experience Qatar’s remarkable hospitality and Arabian ambiance.”

Fashion designer Ms. Grace Chen said: "My inspiration mostly comes from stories of women: how a woman feels about herself, and how she sees the world. My designs always reflect the inner landscape of a woman’s heart, no matter who she is or where she is from. In my "Solitude" collection, Persian patterns were woven into the signature Chinese embroidery, combining influences from Chinese calligraphy. I created a style that is neither Western nor Eastern but reflects a blending of cultures; "nowhere yet everywhere" at the same time.

“As we travel around the world with our Fashion Travel series, I believe this is a global trend and is the true spirit of modernity. It is also what we aspire to at Grace Chen. I am delighted to share some of my works with such a distinguished audience in Qatar.”

Regarded as one of China’s most influential fashion innovators, Grace Chen has been hailed as “the Power Dresser of China” by South China Morning Post and “China’s Most Sought-After Couturier” by The Hollywood Reporter. Her unique designs draw out the beauty in every woman by combining sophistication, elegance and modern aesthetics, resulting in a textural sculpture that appeals to the most stylish and iconic women in the world.
As the first mainland Chinese alumni of New York’s Fashion Institute of Technology, Grace Chen was a designer to the stars in New York and Hollywood before setting up her own label in China in 2009. Throughout her career, Grace has worked with globally-renowned clients including Oprah Winfrey, Academy Award winner Helen Mirren, leading Chinese actresses Liu Xiaoqing, Li Bing Bing, Xu Qing and Taiwanese actress Lin Chi-Ling.

Jewellery designer Mr. Beau Han Xu said: “As an international jewellery designer who grew up in the gem world, I strongly believe that each stone has its own energy and power, and is as unique as the person wearing it. I love to create jewellery that reflects my client’s personality and adds a touch of sophistication and glamour to their journey.

“It is my honour to travel with the world-distinguished airline, Qatar Airways. With this most special private jet catwalk experience, I prepared my “Nature” and “Water Splash” jewellery collections on board. The collection includes the rare pearls necklace, swimming diamonds bangle and tiaras, to accompany the modern, cultured, sophisticated journey with Qatar Airways.”

Beau Han Xu is an internationally-renowned artist, gemologist and award-winning jewellery designer whose work fuses the magical and futuristic. His first collection, Splash!, featured fantastical organic crystal cuffs, chokers, tiaras, and rings ,where diamonds shimmer and swim within. Inspired by nature and the ethereal, Beau’s creations freeze inspirational moments in time: a raindrop’s splash and the subtleties of light playing on light.

Beau has collaborated with Swarovski to create the innovative Beau Cut™ Gemstone. Beau has created an innovative luxury lifestyle, in partnership with Rolls-Royce, Sunseeker super yacht, global top tier hotels and other luxury brands. His clients include members of royal families, celebrities, and UHNIWS.

Qatar Executive currently operates a fleet of 15 state-of-the-art private jets, including five Gulfstream G650ERs, two Gulfstream G500s, three Bombardier Challenger 605s, four Global 5000s and one Global XRS. In 2019, Qatar Executive is set to receive an additional five G500s, as well as one G650ER jet, for which it is the largest commercial operator worldwide. The expanding fleet allows the private jet charter division to serve all crucial markets efficiently and in a way that VVIP customers can enjoy an unparalleled level of service and product from any global destination.

The DJWE, taking place from 20-25 February at the Doha Exhibition and Conference Centre (DECC), features more than 500 international luxury brands displaying some of the world’s finest gemstones, jewellery collections and watches, along with special editions and unique pieces.

Qatar Airways currently operates a modern fleet of more than 230 aircraft via its hub, Hamad International Airport (HIA) to more than 160 destinations worldwide.

The airline has launched an array of exciting new destinations recently, including Gothenburg Sweden; Mombasa, Kenya and Da Nang, Vietnam. Qatar Airways will add a number of new destinations to its extensive route network in 2019, including Malta, as well as many more.


Qatar Airways, the national carrier of the State of Qatar, is celebrating more than 20 years of Going Places Together with travellers across its more than 160 business and leisure destinations on board a modern fleet of more than 200 aircraft. The world’s fastest-growing airline added a number of exciting destinations to its growing network including Gothenburg, Sweden; Da Nang, Vietnam; and Mombasa, Kenya in 2018, and several new destinations are due to be launched in 2019, including Isfahan, Iran and Valletta, Malta.

A multiple award-winning airline, Qatar Airways was named ‘World’s Best Business Class’ by the 2018 World Airline Awards, managed by international air transport rating organisation Skytrax. It was also named ‘Best Airline in the Middle East’, ‘World’s Best First Class Airline Lounge’ and ‘Best Business Class Seat’, in recognition of its ground-breaking Business Class experience, Qsuite. Qatar Airways has been awarded the coveted “Skytrax Airline of the Year” title, which is recognised as the pinnacle of excellence in the airline industry, four times.

Qatar Airways was the first Gulf carrier to join global airline alliance oneworld, enabling its passengers to benefit from more than 1,000 airports in more than 150 countries, with 14,250 daily departures.